Skip to content
I might be jumping the gun on this one, but I think Munich will be my favorite place in all of Europe. After a quick flight from Nice, we were in the most comfortable weather since we started traveling. It reminded us of home. Green, lush, perfect temperature, everyone biking and outside enjoying the parks. It made me a little homesick, but in the best way. Munich was literally Eugene on steroids and we were happy campers to have a little taste of home.

We dropped our bags at our air bnb and searched for our dinner destination. As we walked through our part of the city we took note of how good the public transportation was. Munich has an underground, trains, street cars, and buses, making it incredibly accessible to get anywhere with little hassle. Because we were in Germany we took advantage of the beer gardens every chance we could get. The first one we went to that first evening was an outdoor garden in the middle of a giant park that had rivers running through it. I’m not sure what the actual name of the beer garden was, but most call it the Chinese beer garden because it as a giant Chinese tower in the middle of the outdoor seating and food booths.

To say we were excited about the food was an understatement. We were a bit overwhelmed with the options, so of course we over ordered. Pictured middle school cafeteria lady service is how most beer gardens are laid out. You point to what food you would like and they plop it on your tray. It doesn’t sound so glamorous, but we loved every minute of it. Scott got pork knuckle, spetzel and cheese, and a massive beer (because when in Germany, you must drink beer like water) and I enjoyed curry-wurst, a pretzel bigger than my head, and fries. If you know me really well, I get unreasonably emotional when it comes to food, so Munich was a lot of smiling with my eyes closed while munching happily on everything I could get my hands on.

After our dinner, we walked through the park and watched the river surfers. I had never even heard of such a thing, but apparently it is super popular in Munich. Basically, these super fast moving rivers have a giant piece of rubber attached to a nearby bridge that works to form a wave underneath the water (not the best description, but it is hard to describe). Locals in wet-suits push off of the edges of the river and into the waves on short surfboards doing their best to hold on to a wave before being swept downstream. We saw all different levels of expertise and it was pretty captivating to watch. Something I wouldn’t do though!

Our time in Munich was short, so we tried to pack in as much as possible. The next two days was all about food and sightseeing, but mostly food. We woke up early and took the train to a town outside of Munich to go to the Wildlife Park. I have been desperately missing everyday interactions with dogs and such, so I thought this would be the best way to get some animal time in. Scott was a bit hesitant at first, but it turned out to be a hilariously good time. We got to purchased food at the beginning of the park to feed to the animals as we passed by. It was set up like a giant forest with some animals in enclosures, and others (deer) roaming about. The deer were fearless, but sweet, Scott got his bag of food nabbed from him by a deer, which was hilarious. We even brought carrots to feed the horses. It was a good break from the city.

On the way back into town we had a short detour to the BMW Welt, which was basically an open house of past, current, and future models of the German engineered car.

When we headed back into town it was a food mission. Remember we were only in Munich for two and half days, so we had to get as much as we could. Scott couldn’t even wait to get above ground before he was buying a pretzel in the underground station. Then we checked out Marienplatz, a giant plaza in the center of Munich. We went and bought some Birkenstocks… I was able to justify this purchase for a few reasons, one they are my favorite shoe, two, they are half the price than in the states, and three MADE IN GERMANY!!! So of course you have to buy them from the source!

For lunch we went to the most famous beer garden in Munich, Hofbrauhaus, for sausages, beer, and lots of traditional German singing and dancing. It was quite the sight, people in traditional garb dancing, pounding on tables and just overall so jovial. I’m telling you, Germany was my place, I loved every minute of it. Just a few minutes from the beer hall was the Viktualienmarkt outdoor market. We wandered around there, enjoyed some beef sticks, juices, fresh fruit, and a pickle before heading to get a sweet treat of gelato. 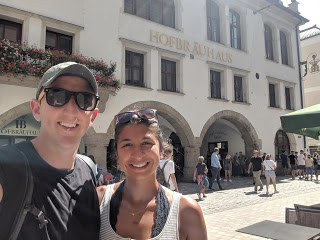 Stuffed to the brim and ready for a nap, we headed back to the apartment to regroup before venturing out for the night. Our room was so cozy and our host had left us key-chain souvenirs of Munich. Such a sweet gesture.

That evening we walked around the parks, saw a little bit more of our neighborhood and had the most average meal of our time in Germany. We should’ve known better… but we get Vietnamese food because we were craving it and it was close to our apartment. Should’ve just stuck to the beer gardens, but it can’t all be fabulous!

Our last day in Munich was all about enjoying the homey feel of the city. It rained most of the day, which was welcomed by us. We wandered around the main plaza, drank the best hot chocolate I’ve ever had at Beluga Chocolates, and ate our last sausages and sauerkraut (another thing Scott has learned to love). We even treated ourselves to traditional apple strudel for dessert. Considering two months ago we were subsisting on baguettes with lunch meat and cheese, we were on cloud nine here.

All said and done, Germany has been my favorite place in all of Europe. I loved the atmosphere, the people were so kind, the city was clean and efficient, and the food was to die for. Munich is one of those places I will have to come back at some point in my life. I would love to do Oktoberfest there and maybe a Christmas holiday for the markets, and cozy, hearty atmosphere. Germany, we will be back!