Skip to content
Okay, we have a predisposition to not really enjoy France, so I was a little hesitant to go back and had zero expectations for Nice. To our surprise though, we were big fans of Nice! 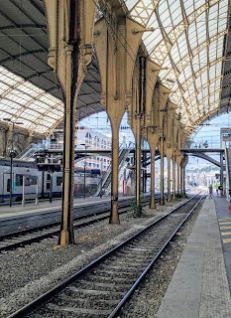 Our first day we arrived pretty easily into the airport and took a bus to the air bnb. We’ve really been blessed on easy travel the last few jaunts. Since we were early to arrive in Nice we asked our host if we could drop our bags and then go explore. He was kind enough to oblige. We were met with a total joke-ster. A sweet Vietnamese man and his wife with an apartment above the restaurant they owned. Scott’s eyes immediately lit up with the anticipation of finally getting decent Asian food on this trip.

We didn’t have time to fuss around so we grabbed our day pack and headed for the main street down to the old town. On our way we saw a McDonald’s, and what has now become a tradition, we always look at the menu in different countries to see what oddity they provide. This one had pancakes with nutella, they were sub-par, but worth the try! We continued our search for a cheap lunch but settled with our last resort, a Lidl (cheapest grocery store in Europe), and got salad, meats, frozen macaroons, Scott had the worst apple of his life, but hey at least we got our bellies full for the rest of the day.

After our grocery trip we decided to take in Nice’s giant beach/ocean. It was actually a really nice rock beach, lots of tourists and locals alike and beautiful blue water. The best part of the beach was actually being able to see planes take off and land in front of us. There was a a mini windstorm/tornado on the beach while we were there, luckily our only causality was one of Scott’s socks. Other people lost umbrellas, scarfs, towels, pretty much everything went airborne. It was quite the sight! 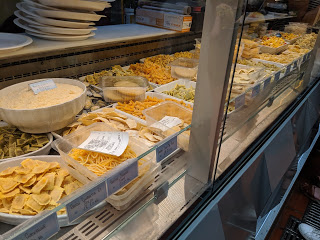 Scott and I have been spending A LOT of time together, three months straight to be exact… So we were bound to have a major fight at least once on this trip. It’s not all flowers and rainbows all the time, that’s just the reality of the situation. We said some louder than usual angry words to each other, Scott went on a walk and I did some reading and reorganized my stuff. He came back with chocolate desserts and all was right in the world again.

That night we decided to try out our hosts restaurant just below the apartment we were staying in. They specialized in “Asian Cuisine” but also had burritos and guacamole. I think they were just trying to please a large variety of people, it still seemed a bit silly though. Anyways, we ordered a pho type soup and a rice noodle with beef and egg-rolls bowl. Both were fantastic, and definitely quenched our Asian food craving. Our host even ended the meal with fresh watermelon. We later found the restaurant on Trip Advisor and it is listed as best Asian in Nice. How lucky were we!

The next morning we headed to the train station at peak time to go to Monaco. For reference Monaco is the second smallest country in the world and basically where the ultra rich hide their money (joking, kinda). The train there was probably the most packed train I had ever been on. Yes, we had been on local undergrounds, and trains, but this was like a BIG, legit train and it was packed. People were yelling and pushing each other, ah the France I remember…

Anyways, we got to Monaco and checked out the rich of the rich lifestyle. Tons of yachts, fancy stores, Monte Carlo (Casino). The biggest surprise of Monaco is we found the best pasta we had ever had from a small market at a reasonable place. Even better than Italy! Salmon pasta with a rich cheese sauce and lots of Parmesan on top, we liked it so much Scott ordered another plate of gnocchi with bolognese. Monaco was fancy and all, but not really our style, so we were on to the next place.

We took a local bus to a small village called Eze. But no, the bus didn’t take you to the village, it took you to the bottom of the cliff and you had to hike uphill for an hour in the heat of the day to get to the village. It was our fault for the time of day we picked, but we had no choice. Scott promised me amazing views at the top so I grumpily climbed up the mountain.

When we got to the top it was incredibly touristy. Turns out that there are some pricery, more luxurious ways to get to the village instead of climbing. The old city is beautiful in itself, but hard to take in with all the tourists trying to get the perfect picture. Even we were in the search for the viewpoint for a perfect pic. We got there and it was a 6 euro charge per person to get to the viewpoint. Knowing us, we would rather spend those euros on a good meal so we wandered a bit more around the town and then trekked down to the beach.

The beach was a bit smelly, the water wasn’t too nice, and we got scammed into buying 6 euro water… So we headed back on the bus to Nice’s beach and hung out there the rest of afternoon and enjoyed our second to last beach day of the trip.

On our way home from the beach we picked up some odds and ends for dinner. Yogurt, a flatbread, and some very cheap pizza from Dominos (I’m a huge Dominos fan). The all day adventure caught up with us and we were gross and sweaty and salty so we relaxed in the apartment the rest of the evening.

For the last day of our time in Nice we wanted to make the most of our last warm weather, beach destination. From here we are headed North, away from beaches and warmer weather. I’m actually a bit excited for a break from the heat. Anyways, we woke up and decided to go for a run to the market. It had been a month since Scott had ran and probably three since I had, so it was SLOW, but felt good to get our bodies moving. We’ve been doing some home workouts with body weight and TRX, but getting some cardio in was nice.

At the market we grabbed some odds and ends of food, a weird jelly cake, a tomato tart, and a really good nutella cannoli. The market was full of fresh fruit and veggies, flowers, baked goods, heirloom tomatoes I wish I could take home to my mom, and lots of art. We rounded out our meal at home with yogurt and ramen.

*I don’t know if I’ve explained our yogurt obsession, so I’ll talk about it briefly here. Scott tries to eat a bunch of Greek yogurt to get some extra protein without spending so much money. I eat about half as much as he does and feel good so I don’t partake in the greek yogurt. Plus I’m a die-hard Nancy’s greek yogurt with honey fan and can’t bring myself to eat any other. We both also eat Activia as much as we can because we’ve found it’s the best things to make our tummies happy. In Europe they eat SO MUCH bread, and we love carbs, but back at home we don’t really eat much bread at all. Getting some extra probiotics as well as helping our bowels has been fueled by yogurt this journey. *

Okay, done with the yogurt rant. Anyways, we headed to the beach after lunch to take in our LAST beach day. We worked on our tans, hoping to keep them for when we get home in September, and watched the waves crash in.

We decided to eat some popcorn, watch some Netflix and enjoy our last night in France quietly. Our last meal was from our hosts downstairs, delicious sizzling shrimp with rice. A perfect way to end a zero expectations destination! Goodbye beach, hello cooler weather!