Skip to content
I have been so excited to write about this place! Scott and I both agreed that THIS was the best place we have been in all of Europe. The smallest, most quaint little island, a hidden gem that has yet to be discovered by major tourism. We were in heaven.

We were told that tourism hasn’t hit the island super hard yet. Most people come over by ferry for day trips, but then leave by 7pm. It is a small oasis that we were so thankful for. 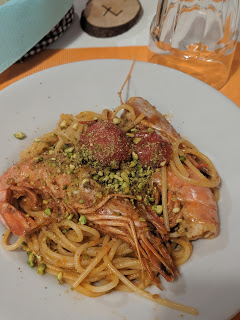 After a pretty harmless day of travel (our last few jaunts have been a bit of a nightmare) we arrived by ferry to a very small island, La Maddalena, which is just off the northern coast of Italy’s biggest island Sardinia. Our order of travel was fly Naples to Olbia, drive from Olbia to the port of Palua, and take the ferry to La Maddalena. Once we parked our rental car we walked down into the old city of La Maddalena. Our air bnb was conveniently located within the city (usually our places are just outside of town). The air bnb was in a multi-level apartment with a common cooking space, our own bathroom and room, and several other guests with similar living situations. Each morning we were greeted by our host with fresh breakfast, the best we’ve had thus far, and his advice on what we should do each day.

We arrived in the evening so we were quick to drop our bags and then explore the city a bit. We walked along the two main streets of the old town and tried to scope out where our dinner would be that night. Again, trying to stay away from hosts trying to heard you in with picture menus and “a great deal just for you.” Luckily, after a few laps around the old district, we found a very small restaurant that wasn’t on google and only had a chalkboard with a menu we couldn’t understand. It looked like it was being run by a local family so we thought we would give it a shot. The place was called Locanda Guarre and it specialized in local food with in-season ingredients, something we definitely love!

Our meal started off with two types of fresh bread, one was like a cracker and the other a traditional french bread. The host told us that the cracker is traditional food because people would bring it up into the mountains with them with no fear of it getting stale as quickly as a loaf of bread. Served alongside the bread was a small container of fresh roasted veggies and olive oil, we could’ve eaten it by the jar fulls, it was so good! We ordered fresh pasta, Scott’s with a spicy red sauce and octopus, mine with a pistachio-tomato sauce and giant prawns. Probably one of the best meals we’ve had this entire trip.

The next morning after advice from our host, we headed to small rock beach just ten minutes away from our place. On our way we stopped for the essentials (yogurt and some Italian starbursts) and headed down a long unpaved road past a few sunken boats. When we arrived at the beach we couldn’t believe that it could get much better (but it did) the water was so clear, with different shades of turquoise and lots of fish.

Just as we were about to set up our stuff and get in an old Italian man in a speedo came up to us and told us in a mix of English and Italian that there was a better beach just a short bit a way that we must walk to instead. So with his brief instructions and hand gestures we headed that way. He even drove his motorbike up to check and make sure we made it to the right spot. We are so thankful we followed his advice because this beach was easily the nicest beach we had ever been to. Filled with locals, it was quite, beautiful and so serene.  We were in paradise, literally! The rest of our day was easily spent there.

That evening was relatively uneventful, we went to the town center to people watch and have a drink. A famous Italian/European drink is called Aperol Spritz, I was yet to have one and Scott convinced me I needed one. Well, I still don’t understand the hype, it tastes like fake orange Fanta mixed with Champagne, but hey, when in Rome I guess? 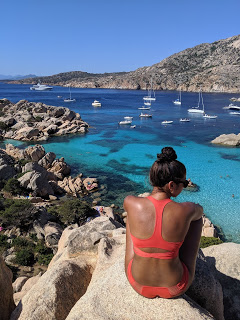 We decided to try out a pizza place in town that was absolutely packed with locals, it was pretty good, but nothing like the night before at Locanda Guarre (I had a feeling we’d be back there).

For our last full day in La Maddalena we took another tip from our host and decided to drive over to another island connected by a small road. This island was strictly national forest/park and had lots of hikes, beaches, and mountain biking. We parked our car on the side of the road and hiked about 40 minutes to what was supposed to be THE best beach in La Maddalena, and honestly it was probably the best beach of our lives. 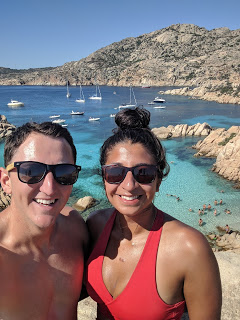 Nothing I or Scott have ever been to can really compare. Because it was a rather difficult hike, not a lot of people were able to make it to this beach, the water was the clearest and brightest blue I’ve ever seen and there were fish everywhere! It’s hard to describe the best beach of your life in words, so hopefully some of these pictures do it justice! We floated around the cove most of the day, trying to take GoPro videos and just goofing around. I even lost my sunglasses trying to jump off of a floaty into the water backwards, but luckily because the water was so clear Scott was able to dive down and retrieve them. 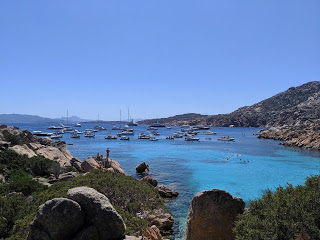 After our day out we contemplated where we should eat our last meal in our favorite place thus far, but ultimately we decided to go back to Locanda Guarre since our first night was so good there. The starters were the same, but we added on clams and muscles steamed in white wine, for dinner I had caico de pepe (cheesy pasta) and Scott had clay pot cooked prawns. We finished the evening with some gelato and walk around the city. It was perfect. 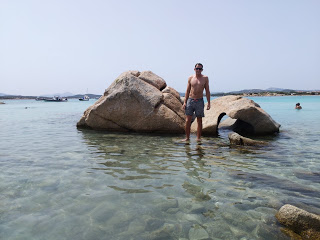 Our time in La Maddalena was amazing. We both agreed that we will have to come back at some point because it went above and beyond our expectations. Our accommodation was fantastic, the beaches were the best, and the food was fresh and local. The only complaint is it was a bit pricey, but that is to be expected on a super tiny isolated island.

One thought on “La Maddalena, Italy”