Skip to content
This morning was probably the coldest it’s been on the Camino since we started. We were alternating holding our hiking poles with one hand while warming up the other in our pockets for most of the morning. The upside of it though was a lot of the terrain was soft, the sky was clear, and the sun was shining. Oh and we met the most friendly horse thus far and we are under 100km to Santiago! 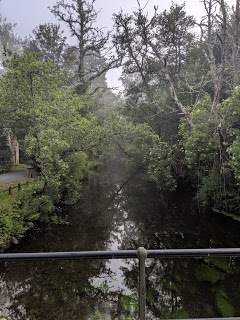 Most of the walk was through farmland and peoples’ back yard, no big towns again. It was incredibly uneventful, but very peaceful. We listened to a few more Podcasts and argued a bit. Which lead to the last hour of silence with Scott walking a good 200 meters ahead of me all the way into our destination. What do you expect though? After spending over 24/7 for a month together we are going to get on each other’s nerves, so we need an hour of silence and distance. It was a good break for both of us. 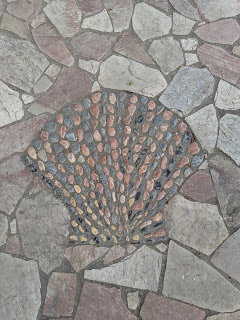 When we arrived into the town it was about an hour before the Albergue opened so we waited on some benches down the street. We ate some leftover snacks and agreed that I was no longer grumpy, and Scott was done being a donkey’s behind. The town is basically only around for the sake of pilgrims, so the grocery store is pretty lacking, but it’s the only one they’ve got. It was enough to get some snacks to hold us over before dinner. 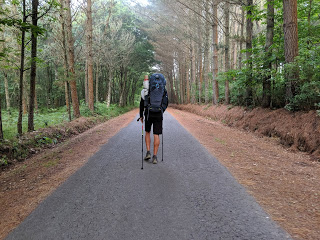 Once the Albergue opened we were some of the first to get inside, which meant first pick of beds. We didn’t have to have a bunk bed which was a relief and we always try to situate ourselves close to an outlet so Scott can plug in his CPAP. The Albergue itself is huge, basically can hold 100 people. We thought because of how many people it could hold it wouldn’t be as nice as it is. There is an old log cabin feel to it with a big fireplace and cozy couches. 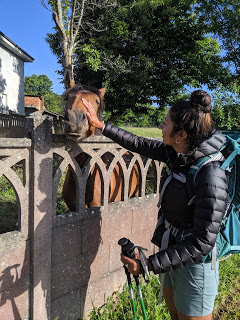 After we were settled in there wasn’t much for us to do. We scrolled around on our phones, took a nap, read some but then we kind of just people watched the rest of the afternoon. Patiently waiting for the dinner spot next door to open. The spot was a burger bar that had some of the highest ratings per google reviews we had seen so we had to try it out. 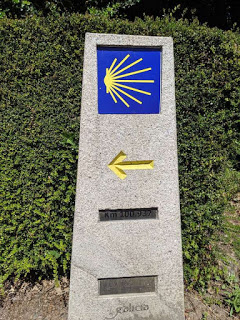 As soon at it was 19:00 we walked two doors down and it was already packed. The owner was very friendly and spoke decent English. He even convinced Scott to spend a Euro more on some good wine. We ordered the camino francis and the camino primitivo burgers with patatas fritas (fries). Before our food came out the owner went around delivering small bowls of seafood paella to every customer, the perfect starter.
I was basically drooling before I even took a bite of the burger. The buns were homemade and everything on the burger was fresh. You could tell the fries were hand cut and fried to perfection. Can you tell I love food? This burger stop definitely fulfilled our cravings, and for $16 including wine, two burgers, and two fries, you can’t really beat it! 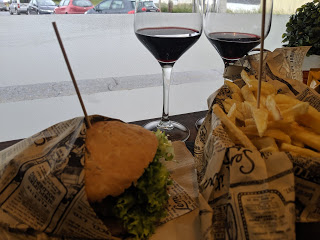 We are off to bed early tonight (hopefully if we aren’t too busy binging Netflix) because tomorrow we have a really big day ahead of us. We are hoping to do the most kilometers yet… wish us luck!
Today’s Stats:
Number of km: 18.6km
Percent paved trail- 10.9km
Percent unpaved trail- 7.7km
Difficulty- Easy
Cities passed through: Ponte de Saa
Albergue- Albergue Xunta, pillows, full kitchen (nothing to cook with though), common space, outdoor space, fire place, clothes lines, hot showers, and wifi