Skip to content
This morning we woke up a little more easily, but our friends from yesterday were basically all out the door a few minutes ahead of us. We quickly packed up our stuff and tried to beat the rest of the pilgrims out the door. I tried to be a little more joyful to be around this morning. I am not a morning person and tend to be a total grouch and for the benefit of Scott I wanted to be a little more pleasant. Our guide book said that this walk was going to be shorter, but not necessarily any easier than the last few and having now finished, I can wholeheartedly agree. It was NOT easy. 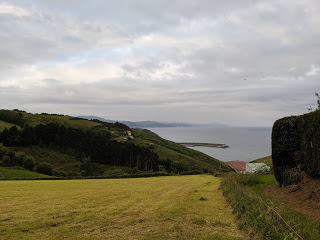 There were almost continuous ascents and descents for the entire duration of the day. It’s Sunday so there are a lot of locals out running, hiking, biking, and horse riding out on the trail, but we didn’t walk with any of our previous buddies. Right at the beginning of our morning we encountered a beautiful horse that came up to the gate and let us pet it. 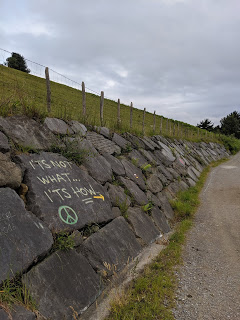 The rest of the day was a lot of complaining (from me mostly) about aches and pains from day 3 of hiking without any previous training and being pretty out of shape. Scott and I aren’t finding endurance to be the issue as we gained that pretty quickly. The main problems are my knee on any type of downhill, which was half the hike today… and a bit of my achilles, Scott’s only complaint is some chafing between his booty and a little bit of chest discomfort. He is really carrying the team. I feel like I am moving slow as molasses because I am. I think most grandma’s could’ve beat my pace today, but my knee was in pretty bad shape so what can ya do? 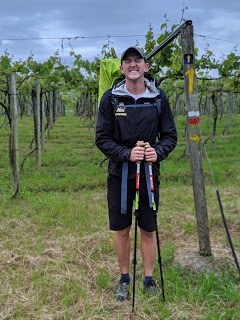 Anyways, there were some high points of the hike today. We saw a lot of horses, cows, pups, and a donkey. For some reason Scott and I feel compelled to talk to the animals as we walk and Scott believes that they’ll better understand him if he speaks to them in Spanish. So he leads with a “Hola” and I just say “Hi.” Regardless, I don’t think we were getting anywhere with them but it is still funny to imagine people watching us talk to their animals from inside their houses as we walk by. 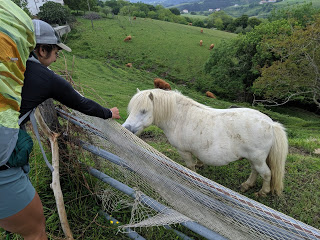 The views today were also spectacular, lots of rolling hills, misty ocean shots, and we trekked through a few small cities. In Zumaia, we stopped for some snacks and a rest, but the rest of the time it was mostly a slow go. Along the walk a farm had left cider for pilgrims to try for a few euros. We didn’t try it because I was focused to get to our destination, but were later told it was an excellent dry cider from some of our friends in the Albergue. We encountered some serious muddy spots, a bit of mist, and whole lot of downhill pavement mixed with medieval stone roads, which are currently the bane of my existence. 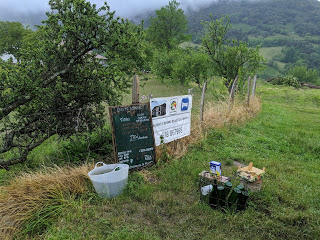 Once we arrived, after a miserable descent to Deba, we checked into the Tourist Center in order to reserve a spot at the Albergue for the night. It was only 5 euros! Then we quickly bought some food from the store and bread from the bakery because they were said to close at 2pm today and no other groceries stores are open on Sunday. In Spain, for the most part, only Restaurants, Bars, and Churches are open on Sundays. Which is inconvenient for us, but I like that about the culture, a day of rest seems necessary and the people seem happier because of it. 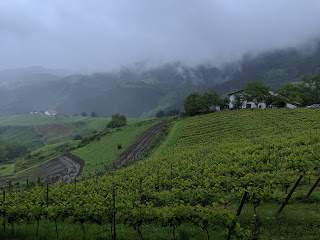 Our Albergue was just a three minute walk from the Tourist Center and it turns out that it is also a train station. The bottom level is for train patrons and then the second and third are the Albergue with showers, bathrooms, laundry facilities, beds, and a common room. An interesting layout but very good location. Once we were situated with our bunks, we went out to the courtyard and ate lunch of… you guessed it meat, cheese, and a baguette. I always put in some chips, which I lovingly call “crunchies” into my sandwich for some texture. I think this is something I picked up from my mom. 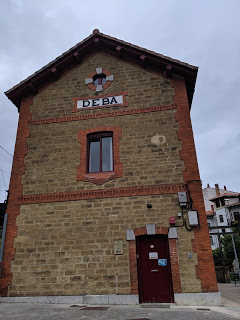 Anyways, after eating we stretched outside, took a rest on our beds and then headed into town. We wanted some hot food, tapas to be exact, to help supplement our dinner which is going to be… meat, cheese, and a baguette. We found a bar on one of the less traveled streets, pointed to a mystery sandwich that ended up being fried cheese and meat breaded and then put in a mini baguette, and a slice of pizza with peppers, cheese and meat. See the trend here? Meat, cheese, and bread. Thank goodness we are hiking so much and burning so many calories or else we’d have another problem on our hands. 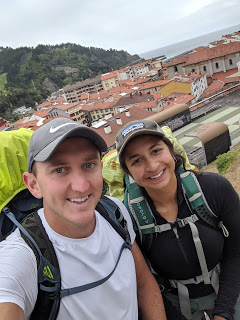 Tomorrow is supposed to be one of the harder days, if not the hardest day of the Camino del Norte. Very large ascents with basically no break for 26km. I guess we’ll see how that goes tomorrow! 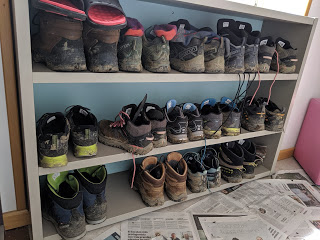