Skip to content
This morning we woke up feeling a bit sore, but more optimistic about the camino than the previous night. Very few people were up when we decided to grab a yogurt and head on our way to Getaria. Out the door we met up with a Portuguese man, Luis, who had introduced himself to us the first day and he seemed friendly enough, but it was a quiet morning so we went with a bit of distance between us and him. The only other people we saw leaving the Albergue so early was a man from Japan, and another from Korea. It seems that the Asians are on it, up early, travel quietly and swiftly, and beat everyone to the next destination. I know that may sound like a huge generalization, but I’m feeling that it will continue to prove true as we go on this journey. 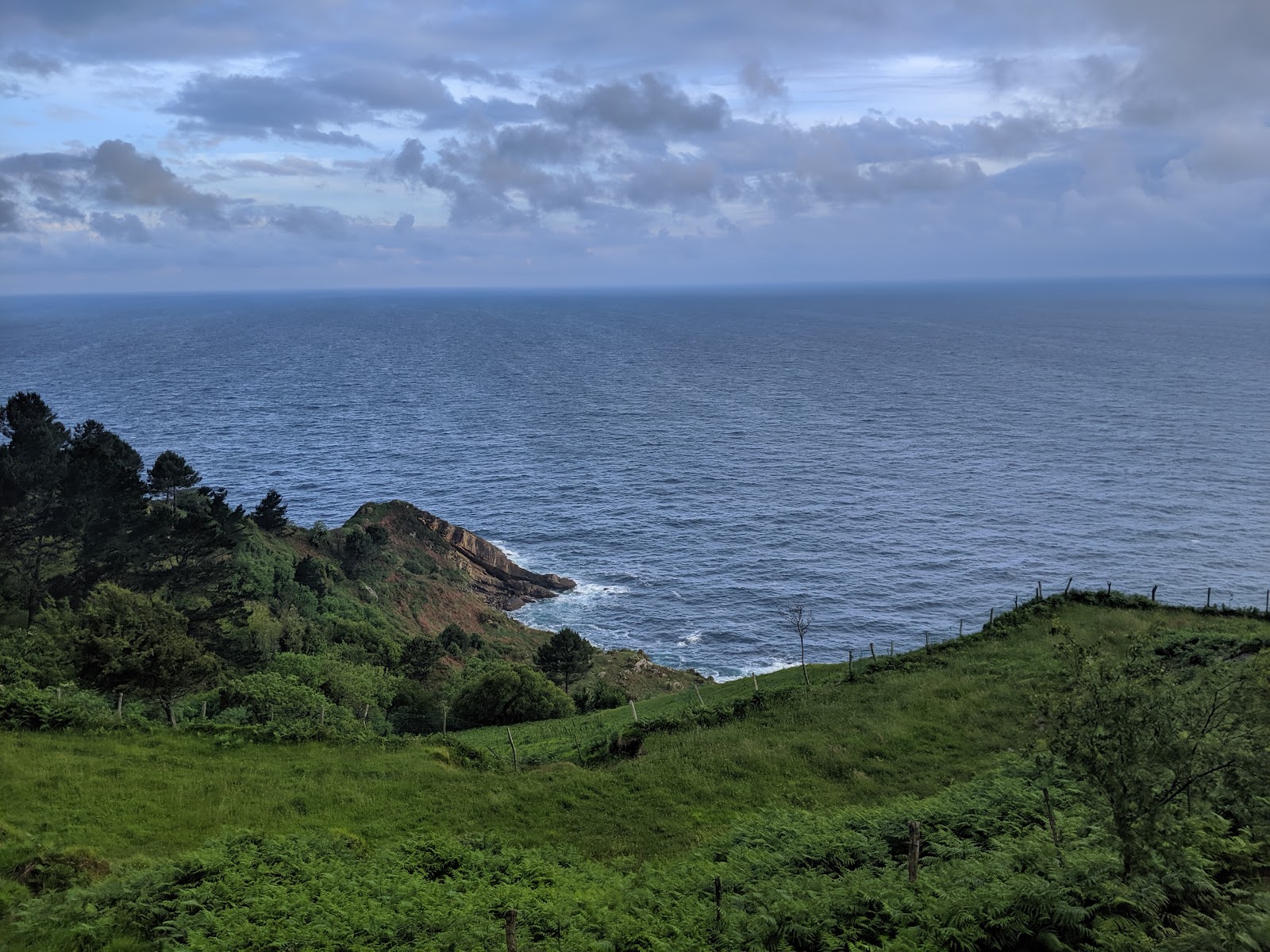 The morning started off with a large initial climb and I could already feel the pain aching in my back and legs. However, the view was completely worth it and we followed the coast most of the first part of the morning along with rolling hills and farmland. We came across a little water station set-up for pilgrims to take a break which I thought was pretty neat, but we had just started for the morning and I was not ready to take a break. So we trudged on. 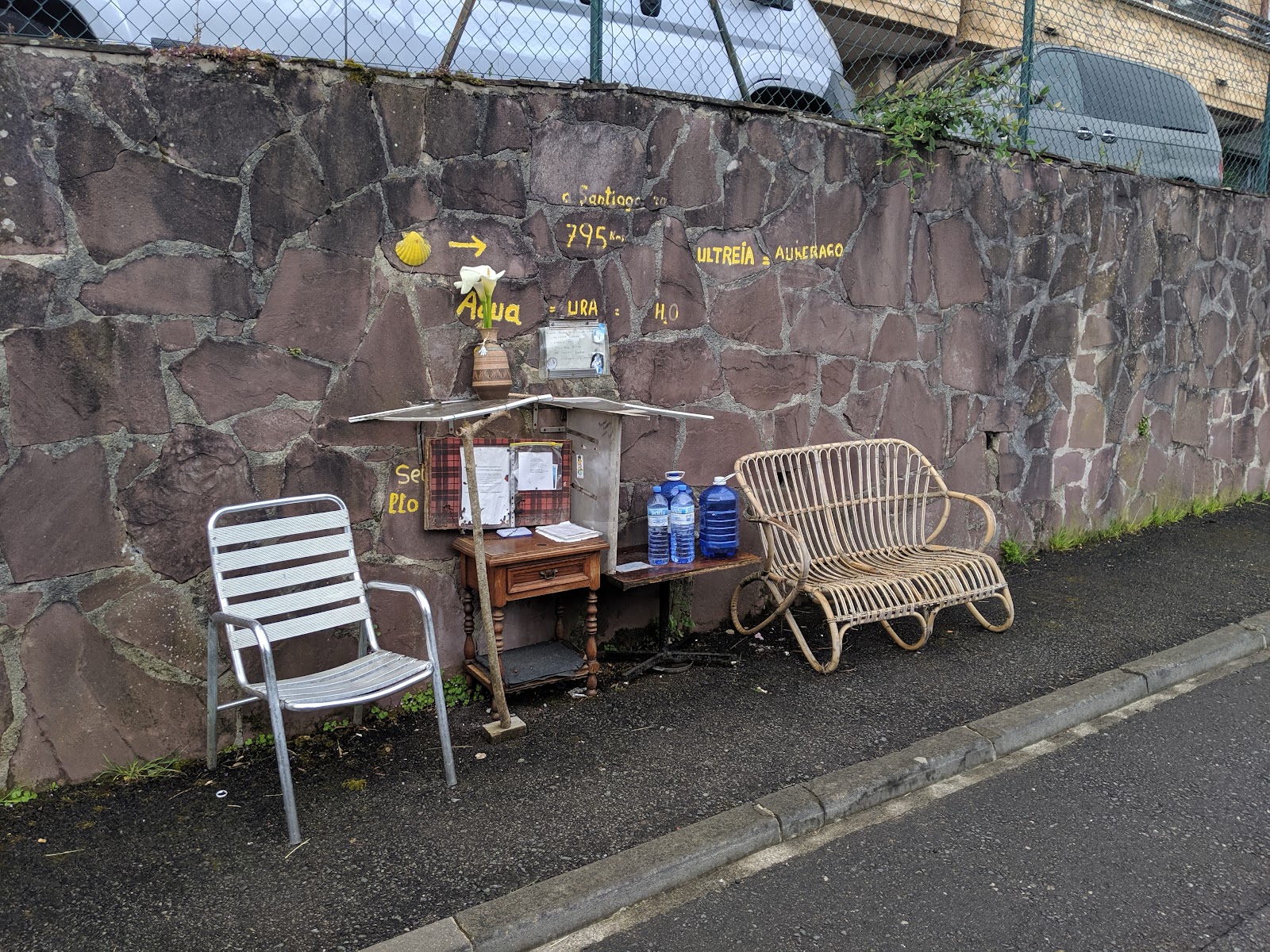 We quietly walked on with the few other people on the trail bouncing back and forth between them until we started chatting to the Portuguese man after he shared some of his dark chocolate Kit Kat with us. He has done several caminos and has a great guide book, so I’m pretty sure we will stay in close proximity to him throughout this trip. His predicted finish is also 31 days which is what we are hoping to complete it in so we can spend some time in Portugal afterwards. He is the biggest spokesperson for the country, telling us about the amazing food, wine, beaches, and historical sites. We were pretty much sold when he said, “Oh my favorite dish is this bread thing, filled with meat, topped with cheese, and then a special sauce.” Okay. Done. Sign us up for Portugal! 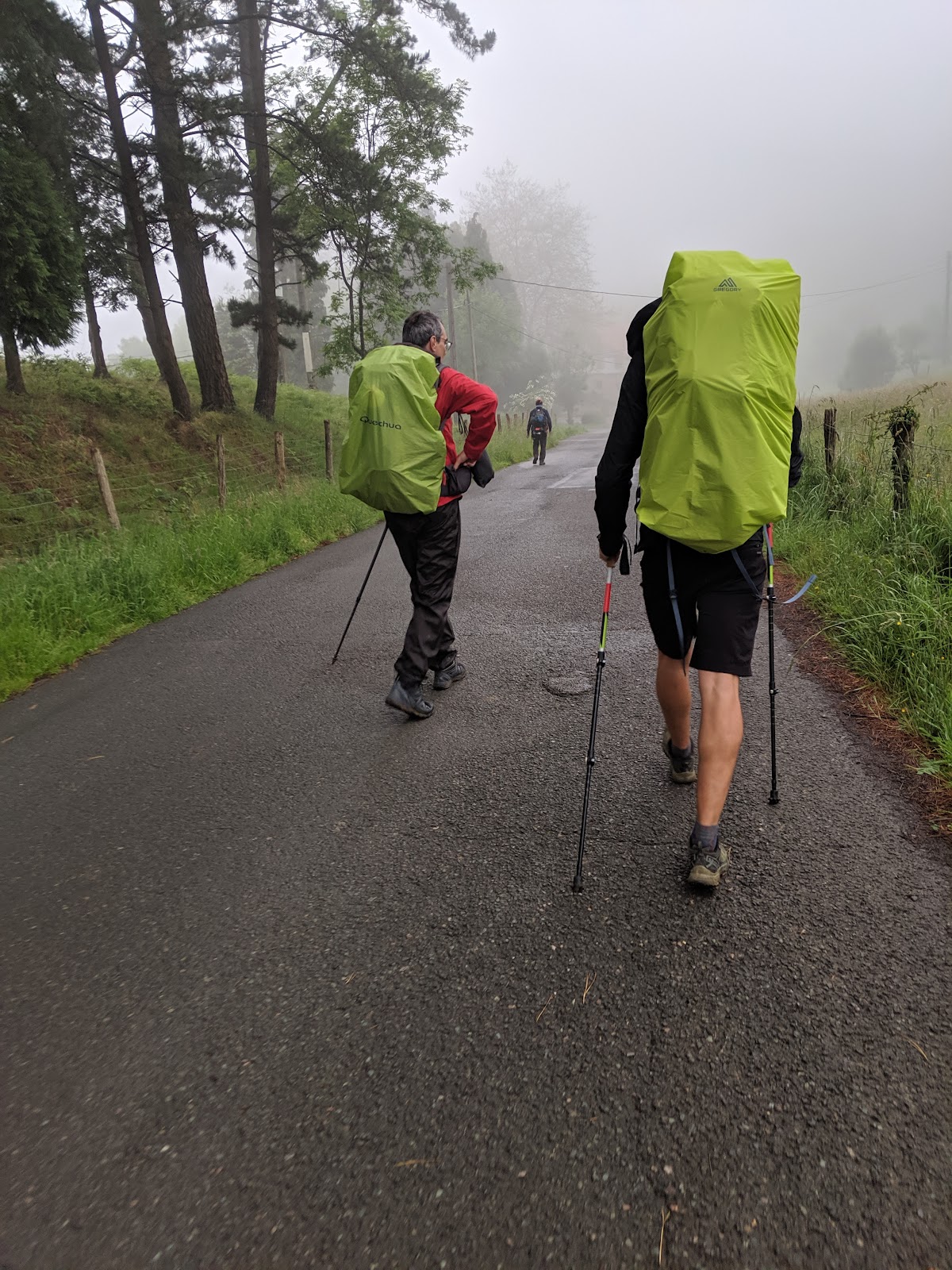 As we continued on, a man from Korea, Su,  joined us and though he was quiet, he was a nice person to have around. We chatted as we hiked along, which definitely made the time pass more quickly. We got to a small town just over halfway to our end point for the night, Olbia. Scott and I snacked and watched rowers go by on the river that ran through the town. It was so cool. They were doing a different type of rowing in larger boats with more people, but the idea behind it was the same. As we continued along we only had one more real climb until we got to Zarautz. It was so beautiful that we saw a couple taking their wedding pictures at the top of the hill before descending into the town. 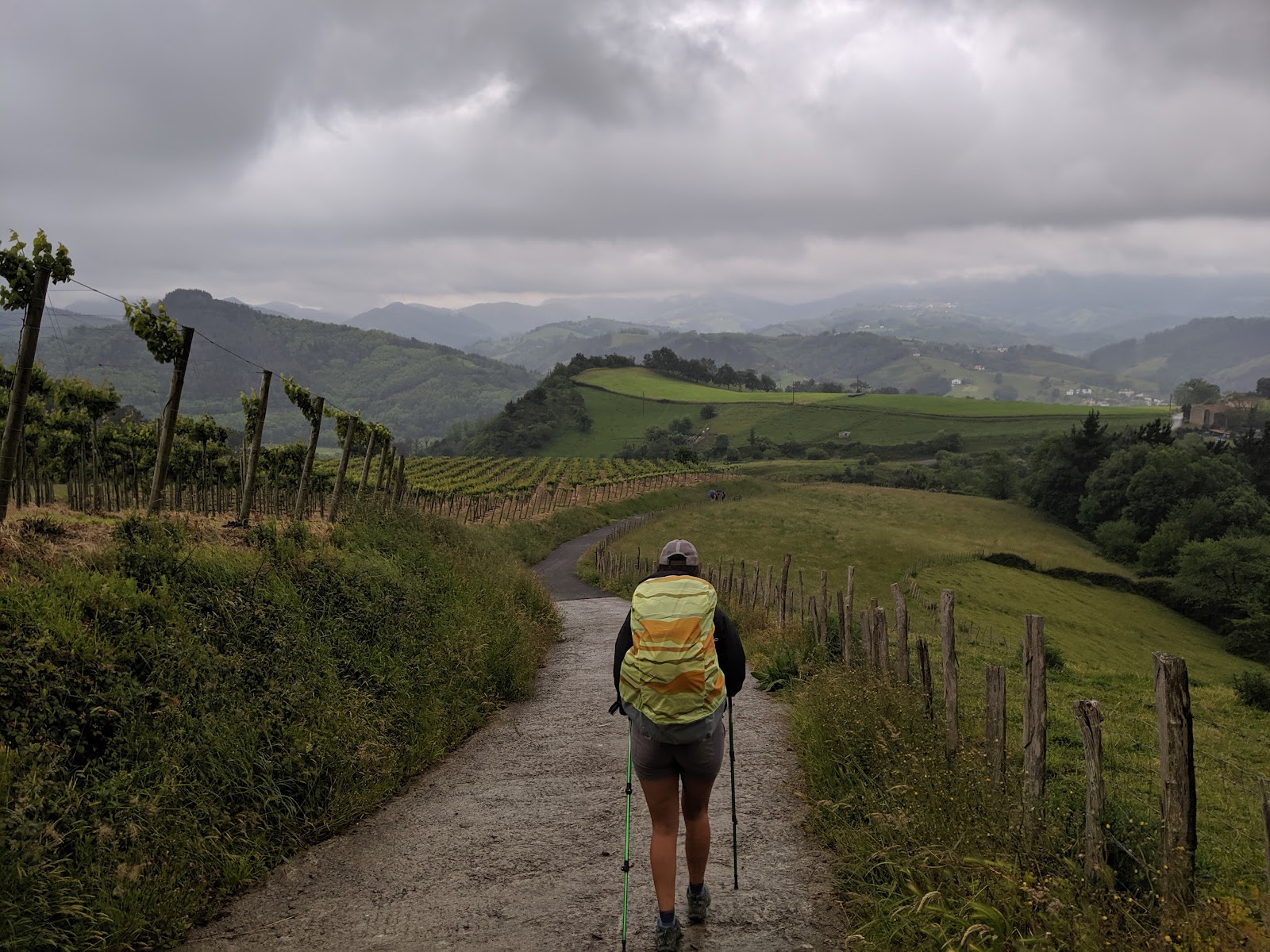 Once in Zaruatz I really started hurting. My knee was hurting from descending down large stone roads, my foot because of some gnarly blisters, and then out of nowhere my achilles was aching so bad I had to limp around. I was probably the most unpleasant to Scott in that moment, I could not take in any of the beauty of the cute city because I was too busy complaining of pain. We stopped in a grocery store because the town we are staying in tonight has no grocery store, and the albergue has no kitchen so we had to get creative. Basically to hold us over we got chips, a baguette, ham and turkey, cheese, yogurts, and hoped that would be enough to hold us over. We left our friends Luis and Su since they were going to stay there for the night and told them we’d meet up with them later on the camino. 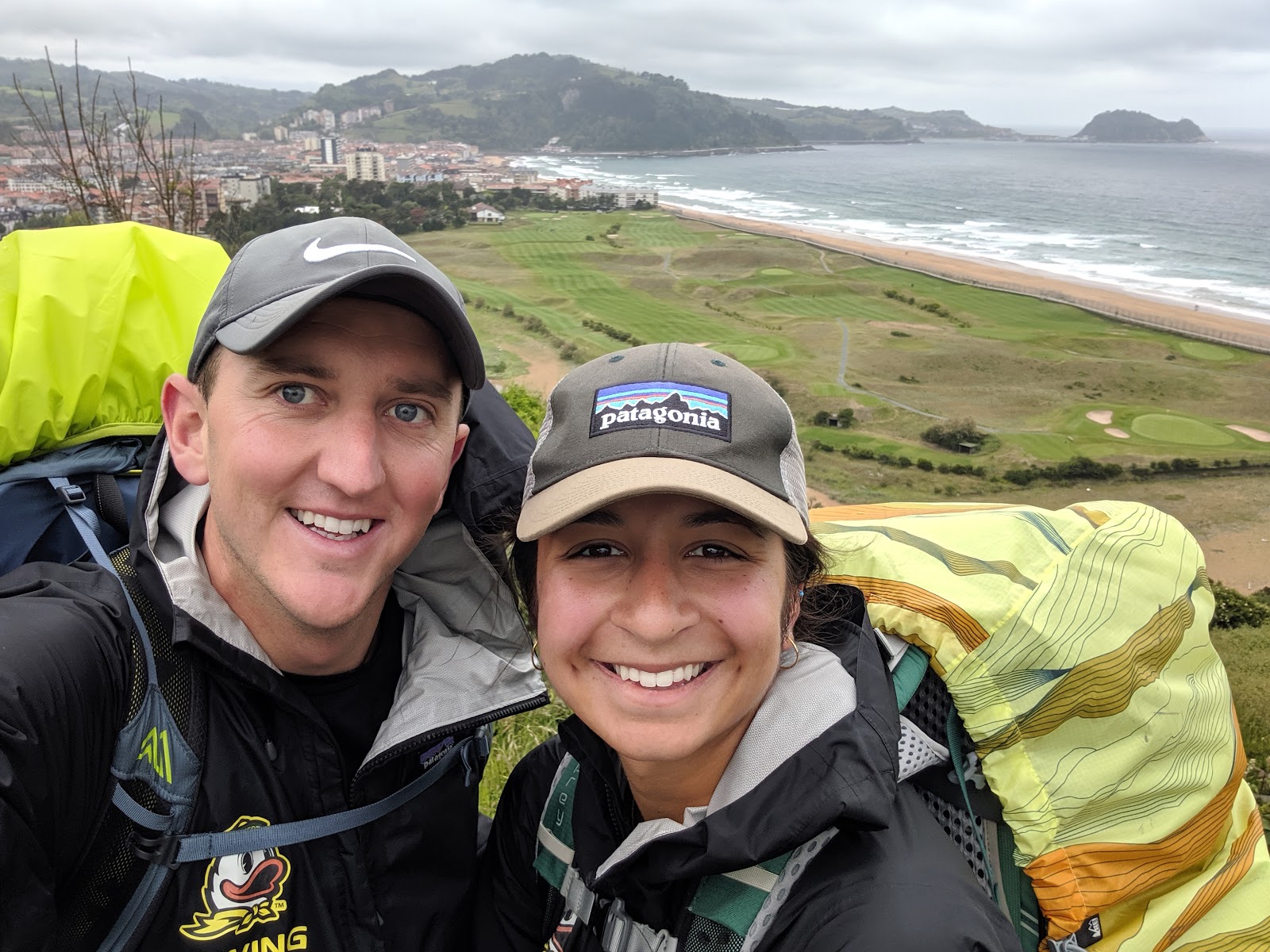 After we left the store we only had a short hour and half hike to the Albergue we were to sleep at, but I was struggling. Going incredibly slow and limping most of the way. But, the whole way there was on a neat little pedestrian path that was right along the river so it was gorgeous and flat (the most important part). 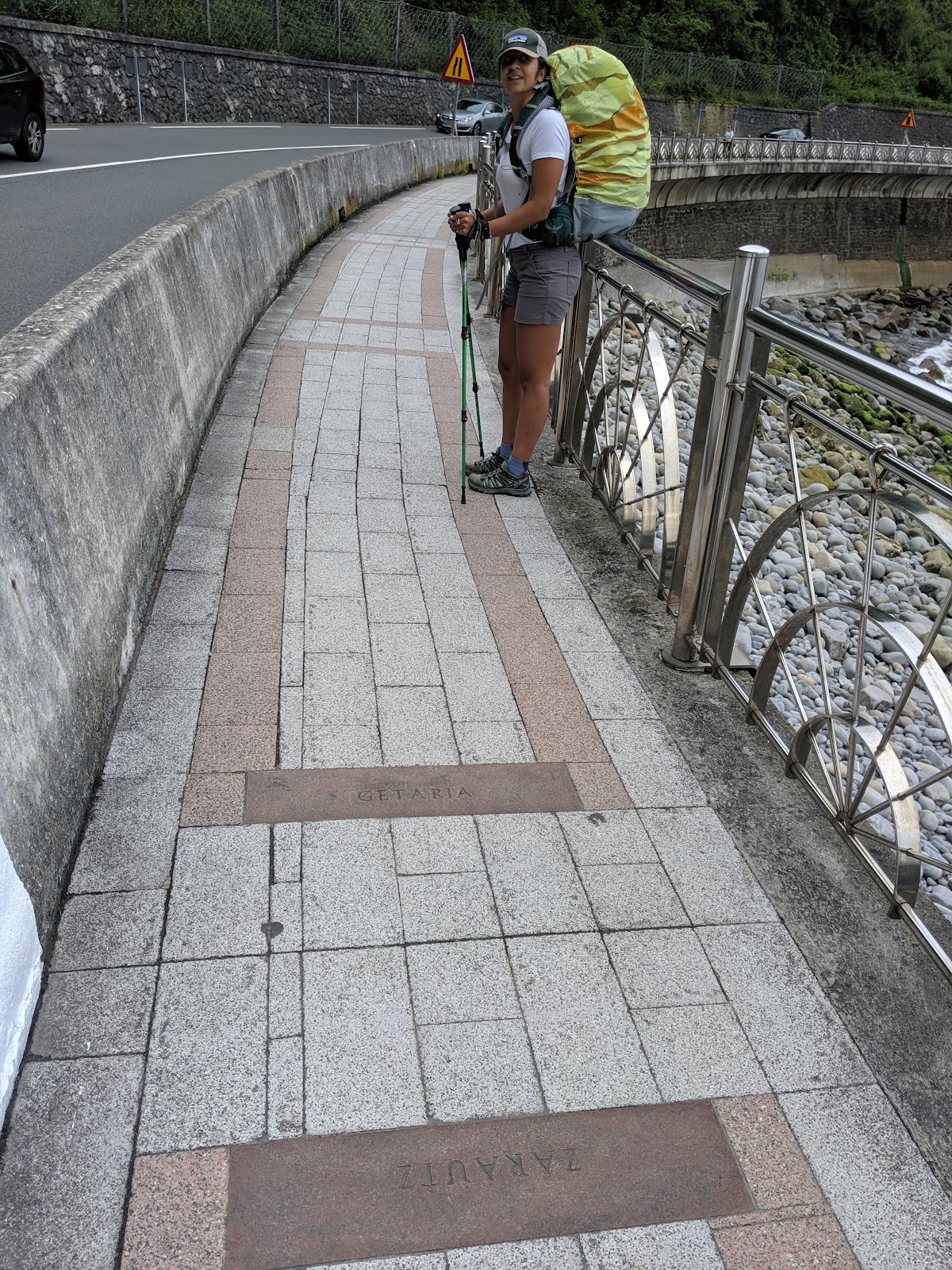 Arriving in Getaria, it was super small but very spanish town. Everyone was out and about, I wish I could’ve enjoyed it more, but I was on a mission to sit down and rest my foot. The very last part of our hike today was straight uphill, and it was not pretty, but we made it. At the top of the hill we saw all friendly faces we recognized. Luis and Su had ended up pushing on to this town to stay for the night and beat us there, a Japanese man that we met the first day was already there too. The Albergue didn’t open until 3 and we arrived an hour early so we all waited and took our boots off and complained about our aches and pain. Not too long after, our favorite couple, two French people we had met yesterday, came bounding up the hill and greeted us. It was a giant reunion and it felt nice to have camaraderie on the trail.

The Albergue, known as Kanpaia, was expensive for what it provided. 15 euros per person, with no sheets, breakfast, fridge or oven. The space is super small with 30 beds crammed into one spot, and only two bathrooms and three showers. It did however have a microwave and warm showers, which was enough for us. Overall, it was an okay stay, but nothing compared to last night where we had all the bells and whistles.