Skip to content
After having a bit too much time in Spain and Portugal we think we found the sweet spot of time in a place when we went to Greece. 48 hours in Athens was near perfect, and four days in Paros was perfect. We found that we got just enough of the island without getting bored or feeling too rushed. I’m thankful that the rest of our trip we spend roughly 3-4 days in each place (with a few exceptions). Regardless, the last week has been a blast! 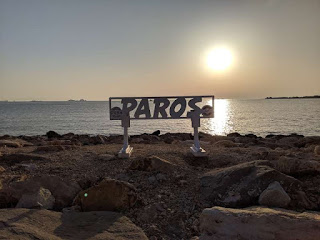 We arrived into Paros via ferry mid afternoon. As soon as we got off the ship, we were greeted by our Air bnb host. It was really warm on the island, so we were thankful to not have to walk with our packs 45 minutes to the apartment. The drive was quick and as soon as we pulled on to the road for the bnb we knew we were in paradise. It had the classic Greek look, all freshly painted white with blue accents and bright flowers laced throughout the walkways and windows. We were led upstairs to our small apartment equipped with a kitchen, our own bathroom, air conditioning (thank goodness!) and our own ocean view patio. After settling into the space, we met with the hosts wife and she told us all about the island, good beaches to go to, yummy restaurants, and helped us with the impossible to read bus schedule. 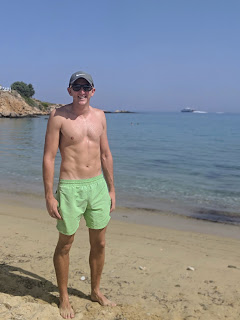 Eager to get to the beach and check out the small port town we changed into our swimsuits and walked down to the town. We were both pretty hungry from the long morning, so we searched around for some kebabs, hoping for relatively cheap and authentic ones. The town was dotted with small shops in cute alleys ways, but the heat during the middle of the day made it a ghost town and practically unbearable. We found a delicious and cheap place for some tzatziki, pita, and a kebab sandwich (mystery meat, tomato, onion, yogurt, and pita). Our host advised us to buy water from the grocery store as the water on the island “didn’t taste nice” as she so described. Scott, being hardheaded and a penny pincher, decided he wanted to bring two large six bottle cases of water for the hot, unpleasant walk home. I warned him against it, but he didn’t listen. Needless to say, our walk home was slow, miserable, and he vowed to never do that again. 😊
After dropping off the water we headed to the local beach a short walk from our apartment. The water wasn’t as cold as it had been in Barcelona, it was perfect to just lay and float for an hour or two. Plus the scenery was unbeatable. Looking back onto the island we saw bright white houses snuggled up to the mountains of Greece, with bright blue sky and water as the backdrop. We both agreed that Greece would be a place worth coming back and island hopping. On our way back from the beach we decided we would do a quick workout before heading into town for dinner. It had finally cooled down a bit so we were able to do our own workouts and then walk to dinner peacefully. We had such good luck with our lunch spot, we ate there for dinner as well! The food seemed pretty healthy and we didn’t feel bad after eating it, so it was a win-win overall. 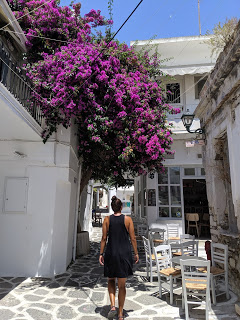 Our next two days in Paros were much of the same. Wake up, head to the beach, go back to the apartment for a snack of yogurt and ramen, back to the beach and then in town for dinner at our favorite place. We had become regulars there, ordering the same thing every time and visiting at least once every day we were on the island. 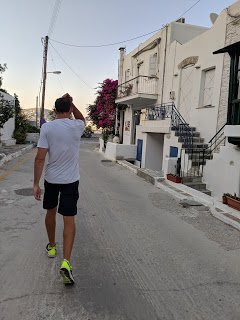 On our last full day on the island we were convinced by a nice man to rent a scooter to get around the rest of the island. It was probably the most fun part of being on the island. Scott, having a motorcycle license and quickly obtaining an international license, made the process easy and made me a lot more comfortable. We decided we were going to do a whole loop around the island and go a little inland to a mountain town we had heard great things about. 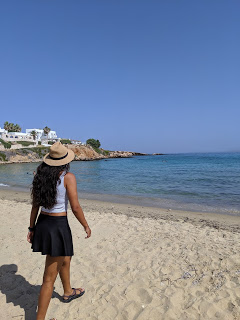 Our first stop was Aliki just 20 minutes from our apartment, known for kite surfing and all sorts of water sports. We sat and watched for a bit, I even tried to convince Scott to give it a try (I’m sure he’d be really good), but he decided another time when he could spend the whole day doing it. We stopped at a few more beaches along the way, checked out all the small towns (pretty much the same throughout Greece, but still cute), and then headed inland toward the mountain town. 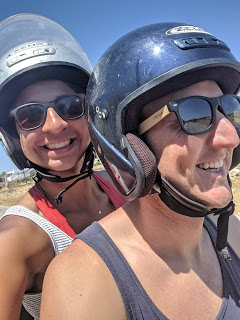 Leftkes, known for wildflowers, old churches, and hilly landscape, was cute and much of the same as most Greek towns. We had some delicious donuts there and then continued on to the Northern tip of Paros (the most touristic). A lunch of another kebab and we were ready to get out of the crowded town. Scott found a little beach where a bunch of yachts were parked so we stayed there for a few hours before finishing our loop home. 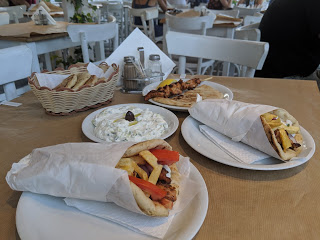 The scooter was such a fun way to get around and definitely a lot cooler than walking. We are considering renting a scooter in a few more places as it is cheap and allows us to see a lot more. 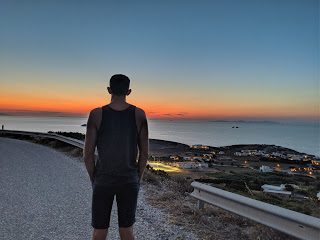 Paros was a total treat for us and opened up all the possibilities of the Greek islands. We will definitely be back!