Skip to content
…And we are back by popular demand (really just our parents). The last few days have been nothing short of wonderful. I can’t even begin to describe how nice it has been being able to relax, not carry my pack everywhere, and not walk 20+ kilometers each day. Through all the blogs I read about the camino everyone says they miss walking… I am not one of those people. We’ve gotten our workout in for the next year. 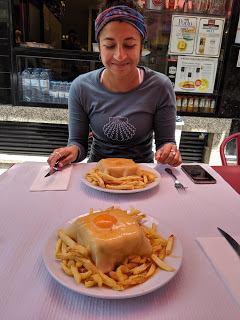 From Santiago we took a five hour bus to Porto, Portugal this last Wednesday. The ride was easy, not too many winding roads as we took the main highway almost all the way there. Once in Porto we had a few hours to kill before check-in at our air BnB so we sought after a Portuguese delicacy our friend from the Camino, Luis, told us about. 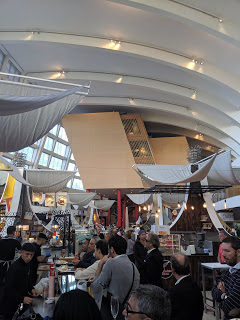 The name of the dish is francesinha, sounds like france-and-zinger, or at least to us that’s what it sounds like. It consists of two slices of toast with three types of meat and a slice of cheese on the inside. Then the whole thing is covered in a few more slices of melted cheese, and topped with a spicy tomato sauce, surrounded with fries (Scott got his with an egg on top. If you know me, you know that just wouldn’t be an option for me, yuck). It was just short of a heart attack, but wow did it taste amazing. Having a hot, protein filled sandwich, was something of dreams for us and we savored every bit. 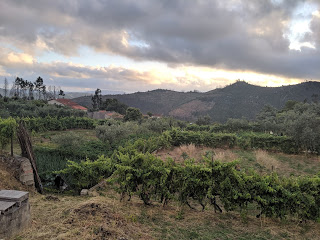 As if we hadn’t stuffed our faces enough, we still needed to continue on to a bakery. We were finding that Portuguese food is not all that expensive, so more reason to splurge. After some tea and cake we found our way to our air bnb, located in old Porto center. An older woman who spoke no English (but really wanted to be able to have a conversation with us) answered the door. She brought us up to a perfectly decorated apartment and tried to explain how the locks on the doors worked. 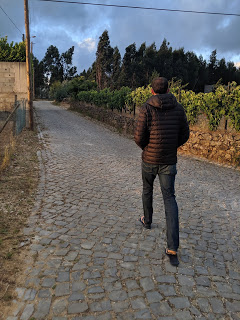 Luckily, her daughter, who was the person we had been talking to through air bnb, spoke English and came out to greet us. She was one of the sweetest people we had met through air bnb. As she talked to us about her home, she apologized for her English over and over again. Then she told us why she got into air bnb. Her husband had passed away at a young age a few years earlier and she was depressed and in a dark place, air bnb essentially helped her get back on her feet. Not for the money, but for the people and cultures she got to experience through it. She genuinely just wanted to connect with us and share her love of Portugal. 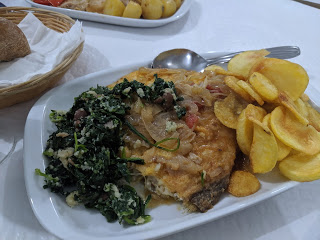 Her hospitality was endless, she went above and beyond. The take she had of air bnb was the way it was originally intended to be used, with a person just sharing a room in your home and breakfast was provided. It was a massive breakfast (cookies, meats, cheese, breads, yogurt, coffee, tea, juice) which we were extremely thankful for. We were only staying one night but she let us leave our giant packs in her home while we explored a little more of Porto before our bus left the next afternoon. 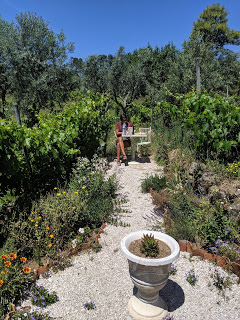 For the rest of our meals in Porto we went to a large market just a few minutes from the air bnb. It had many different restaurants, bars, and dessert places all under one roof. There was even live music while we were there! Scott and I decided we wanted to sample a bunch of different foods so we split,  farrow and chicken soup, suckling pig sandwich, shrimp pasta, Gorgonzola pasta, egg custard tarts, Oreo cake, and caramel cheesecake. Mind you this was over a two day period! 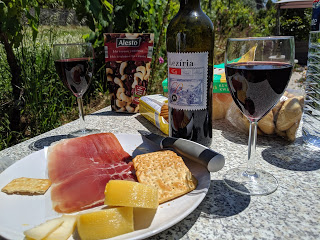 After we were done stuffing our faces yet again, it was time to take a bus to our next destination. A small town in central Portugal, close to wine country called Figueiro dos Vinhos. The woman who was hosting us in her air bnb is British and retired early in the country side of Portugal. She was kind enough to pick us up from the bus stop and give us a little tour of the town. 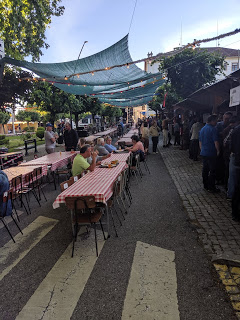 When we arrived to her house she gave us a tour of the area of the house that was ours as well as her veggie garden, their small vineyard, and private patio. Again, we got lucky with our hostess, who is sweet as can be. She gave us all sorts of tips about the local town and really gave a homey vibe to settle into. That evening we checked out a local bar and accidentally ordered way too much food, but it was delicious. Oddly cut potatoes with salty fish, and moist pork, seafood soup, hearty bread and a good bottle of red wine. Just what we needed! Portugal was really satisfying the inner foodie in both of us. 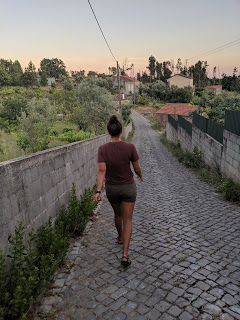 Once back at the house we got to take in the scenery from the two large windows from our room. We are looking out at lush vineyards, gardens, and sharp ridge lines. Every night we’ve gotten to see the sunset from our room, there’s not really much more you can ask for. 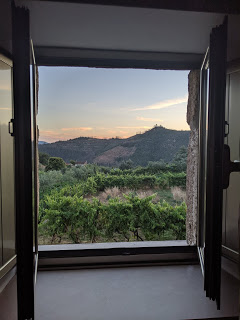 Our hostess informed us that we are here at the perfect time because it is basically the biggest festival weekend of the year called Sao Joao. Everyone in the town celebrates with food, crafts, and live music. So on our first full day in Figueiro we woke up, headed into town, and checked out the famous bakery while watching the set-up of the big celebration. It looked like a large Saturday market, with booths and stages.

I am finding that most things in European countries usually happen later in the day so we decided to head back to the air bnb (just a 20 minute walk). We had nice little lunch of wine, meat, cheese, crackers, and cookies on the back patio, take a nap, and then head back to the town center for dinner and to check out the music when more people were out and about. 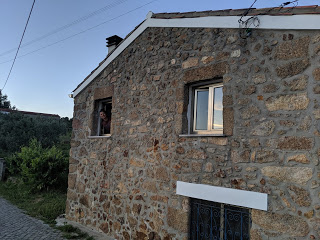 In the evening we headed back into town and it was much busier than the afternoon had been. We saw families, young adults, basically everyone in the town there. Every food booth was selling small beers with pig sandwiches, soup, and chips. After eyeballing the 10 or so booths we decided to order from the most busy one because it had to be good. And it was! Portugal knows something about pork sandwiches. There is absolutely no sauce, nothing but pork inside a piece of bread, and it is perfect. Rinse that down with a beer and finish it off with a churro and you’ve got a very happy Scott and Hali. We were basically lulled to sleep in a food coma after that. 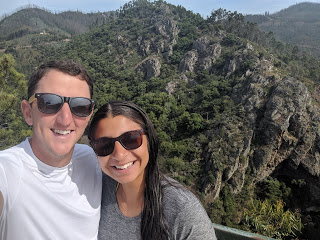 Which brings us to today. This morning started off slow, we are both finally starting to feel recovered from the Camino. No more waking up with stiff joints and tight muscles. Our host offered to take us around to some sights in the area briefly this morning, so we took her up on the offer. We went to some old villages that had been recently restored. They were directly on the ridge line with sharp cliffs on each side. Harsh living conditions caused them to be uninhabited for many years, but more recently local people have taken time to restore and now live in them. She also took us to a river beach where in the summer they dam up the river so it creates big pools to swim in. The water was a bit too cold for us, but the sights were still beautiful! 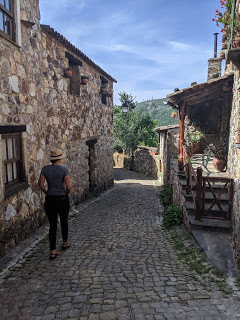 The rest of the day we’ve basically snacked, ate a $3 family size lasagna (turned out pretty good), and napped in preparation for this evenings festivities. The main act in town goes on at 11:30pm and then the DJ goes on at 1am. We are struggling to stay awake and it is only 10pm now. This is the latest we will have stayed up since being in Europe… I’m feeling old. However, this is basically a once in a life time thing. I doubt I’ll ever be back in Portugal at this same time for this celebration again, so we have to live it up now! 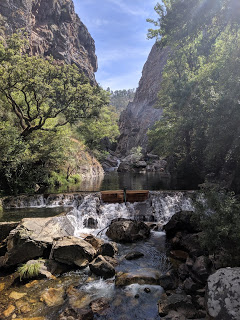 Now that we’ve taken a little break from everything (including blogging) I’m hoping to get back more consistently writing. Hopefully tomorrow I’ll have some good stories to tell about this evening 🙂