This morning started off with a blunt but realistic talk between Scott and I. With me moving so slow, should we continue on? This is something not worth potentially injuring myself for the long term of my life. I was really unhappy about the whole conversation because the Camino has been something I have been hoping to do since I was a junior in high school, and I still hope to do it again in Portugal with my dad some day. However, the options needed to be discussed. We said that we could bus to the last 100km (you get your certificate of completion if you do 100km or greater) and then take 4-5 days to do that, but if you know me there’s no way I will ever agree to that. So, the next option was to take the mindset that it’s not about the ending but the journey and end in a few days and then head to anywhere in Europe. Also did not agree with that one. Scott offered to carry more of my stuff, which though I am hesitant, sounds like a better idea. But as we hiked on, we realized that I only really move slow for the first two hours because it is cold, I’m not warmed up, and I haven’t taken any ibuprofen.  After that two hours, I’m golden. So, we finally decided that we are going to continue on, send a box (we already sent two) to Santiago of more of our extra weight that we don’t need, and Scott will carry a few of my things. Not the best-case scenario, but at least it has us projected to getting to Santiago and finishing the Camino. 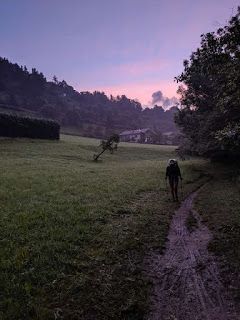 Now about the rest of our day, we stopped in a small town called Bolivar for breakfast. We ate cereal bars, crunchies, and peanuts. Not our best breakfast but it got us by! Then we continued through the rolling hills of farmland, small ascents and descents the whole time. Today was by far the muddiest and rainiest of the days we’ve had, but we also got to see the sun which we haven’t seen since we started this trek. 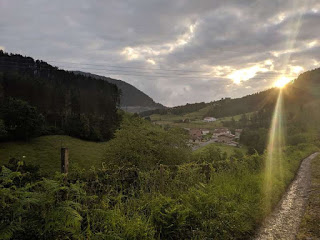 I got my horse fix in today as we passed quite a few, but more importantly there were a ton of cows and some baby calves that were in the middle of the trail. My day was totally made. We passed through a monastery and hear chanting and singing that was beautiful. Scott fell in the mud trying to fill up our water bottle at a natural spring that turned out to be all dried up, but it was hilarious all the same. Then we stopped in Mendata and had an orange and talked to a young guy from Norway who was also doing the Camino. 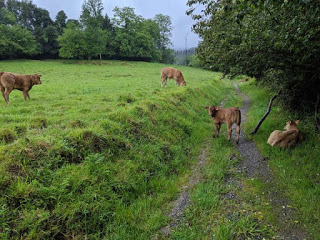 After a few long hours (like 8) we finally reached Guernica, the Albergue we are staying in is actually a youth hostel called Gernika Lumo. The municipal Albergue is only open August. We payed 18 euro each for the hostel, which is pretty expensive for us, but it had everything that we needed. The showers were especially nice here, probably the best all trip. Once we were checked in, we snacked on avocado and crackers with some cups of ramen on the side as our late lunch. Then we walked into town, ran some miscellaneous errands, sent more of our stuff to Santiago, and went to the bakery and grocery store. 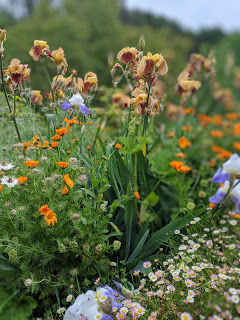 Now we are all settled in, about to make pasta with meat sauce for dinner! You heard that right, this girl isn’t eating meat, cheese, and a baguette for dinner tonight. We even got a zucchini to have on the side. If you can’t tell, I’m very excited about our upgraded meal tonight. All thanks to having a kitchen in this hostel! 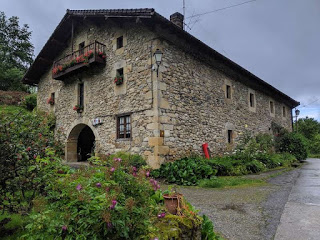 Tomorrow is another tough day, not because of the terrain, but because we are doing a little over 30km (over 20 miles). Hopefully after tomorrow we will start to have a bit easier days with less miles and difficult terrain! 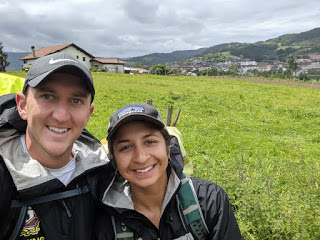 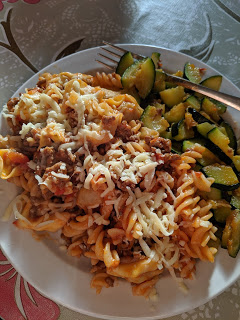